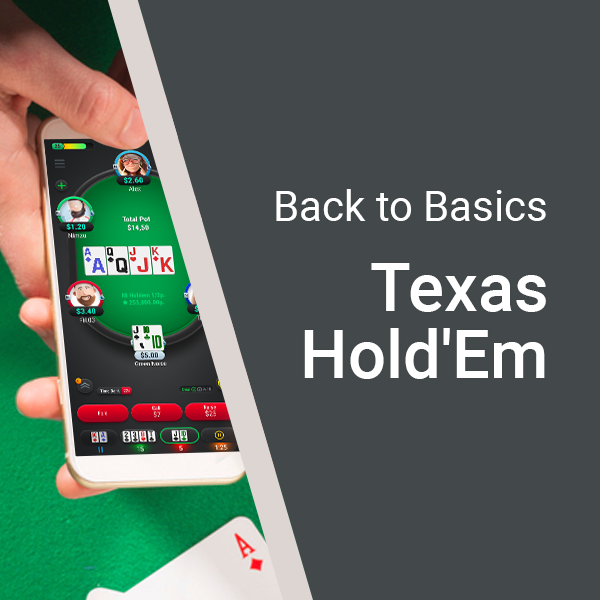 Back to Basics: Texas Hold'Em (part 1)

We talk of poker, when it would be more correct to say "pokers". The range of variants that fall under the same umbrella term have lots in common, but also lots to set them apart - quite often that includes the game approach, such that a poker professional in one type of poker may easily lose to a rookie in another.

The most popularized poker game is Texas Hold'Em, being also the style of choice for WSOP. It further comes in two variants, 'limit' and 'no limit', the difference concerning restrictions - or no restrictions - in betting values that can be proposed throughout the game.

The rules are simple: each player is dealt two cards, also known as 'hole cards'. Upon getting to know their cards, players can:

1. raise, by increasing the value of the nominal bet of the game. 'Raise' is also a call for action for other players, who need to decide whether they want to pursue a win by 'calling' or announcing a further 'raise', or whether they will 'fold'.

2. they can fold, by deciding their hand is not worth pursuing and limitting their losses to the value of the nominal bet of the game; by making a 'fold' decision, players automatically resign from the ongoing hand and can only rejoin with the next dealing of 'hole cards'.

3. or they can call, when they decide their hand is worth giving a shot and they match the 'raise' at the value proposed by the player that initiated the 'raise'.

When all bets, calls, raises and folds have been concluded for round one (also known as pre-flop), three cards are dealt face up on the table. This is called the flop.

All players can use the cards laid on the table to form winning combinations, and they can be quite different from one player to the next. While for one player the cards can help form a flush, another will end up with two pairs.

This stage of the game is crucial as this is the point where most players make strategic decisions about whether or not to pursue a win, and if so, how to go about it. Some players may realise they can form a rather powerful combination, while others may realise they can form nothing of value, but decide to go for a win anyway by means of  bluffing - aggressive play that will trick other players into thinking they are facing an oponent with a stronger hand and decide to fold rather than risk further losses.

The flop triggers a new round of calls - raises - folds, after which another card is dealt face up. This card is also known as the turn.

Yet another round of betting takes place and the remaining players get to see the last card to be dealt: the river. At this point the final round of betting takes place and some form of conclusion follows. It may be that all players still in the game turn their 'hole cards' upside down and the winner is easily revealed - this is called a showdown. Quite commonly though, one player will have intimidated all other players into folding, in which case he/she does NOT need to show their 'hole cards' at all!

Texas Hold'Em can be won with great combinations - great luck - but it can also be won with lousy combinations, but great skill. It is why professional poker players go to great lengths to perfect their psychological "warfare" and to deepen their people-reading skills, along with extensive knowledge of the game: combinations, strategy and anticipation of other players' moves and strategies.

Poker has long surpassed the association with games of chance, to move towards being viewed as a sport, and one of great skill too. Texas Hold'Em and its surprising turnouts are great evidence of that.